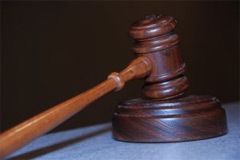 A Fort Myers jury has awarded the victim of a Fort Myers car accident more than $3 million after a four-day jury trial. The victim was represented by Personal Injury Trial Lawyer Randall Spivey of the Spivey Law Firm. The suit was against the victim’s own insurance carrier, State Farm which refused to pay for the client's injuries under the policy’s underinsured motorist benefits.

The crash happened two days after Christmas 2008. The firm's client was westbound on 12th Street West in Lee County when he was struck at Douglas Avenue by a vehicle that ran a stop sign. The other driver was not familiar with the area, didn't see the stop sign and never even hit the brakes. The client was taken to Lee Memorial Hospital with a cervical facet fracture and a broken left wrist.

The client underwent surgery in April 2009, during which a plate was put into his neck. His hand and arm were put into a cast and he went through several months of therapy. The neck injury caused nerve damage, problems with his arms, and significant pain. Despite rehabilitation, the neck injury has limited his activities and left him facing years of pain management. At the time of the crash, he was taking a one year leave of absence from his position as a teacher at Immokalee Middle School, where he spent 35 years. Instead, he was disabled and unable to return to the career he loved. His injuries also left him unable to enjoy some of his favorite pastimes, including fishing, boating and working in the yard.

“The jury understood that the victim’s injuries will affect him for the rest of his life – his ability to deal with the pain from these injuries will get worse, not better, as he ages,” Spivey said. “He misses his active lifestyle that he had before the accident – and greatly misses not being able to return to teaching. The money will help him with all of his future pain management care needs and lost earnings.”

Unfortunately, far too many clients learn in the wake of a serious or fatal accident that their insurance company, or the insurance company of an at-fault party, is much better at collecting premiums than paying claims. Had State Farm paid the policy limits of the purchased coverage, there would have been no need for a trial. However, when an insurance company acts in bad faith or otherwise fails to honor its obligations and commitments, the company can be held liable for damages in excess of the policy limits. State Farm fought the claim and asked the jury to award only $400,000. As a result, it must now pay all awarded damages.

Randall L. Spivey is a Board Certified Civil Trial Attorney – the highest recognition for competence bestowed by the Florida Bar and a distinction earned by less than 2 percent of Florida attorneys. He has handled over 1,500 personal injury and wrongful death cases throughout Florida. For a free and confidential consultant to discuss your legal rights, contact the Spivey Law Firm, Personal Injury Attorneys, P.A., in Lee County at  239. 337.7483 or toll free at 1.888.477.4839, or by email to Randall@SpiveyLaw.com. Visit SpiveyLaw.com for more information. You can contact Spivey Law Firm, Personal Injury Attorneys, P.A. in Charlotte County at 941.764.7748 and in Collier County 239.793.7748.