Most drivers in Southwest Florida have seen bumper stickers which say, "Watch Out for Motorcycles", but what we do not see are bumper stickers which say, "Watch Out for Runners." Running is a year-round activity in Lee, Collier and Charlotte Counties. The appealing weather and flat terrain has made running one of the quickest growing sports and activities. Anyone can be a runner. Size, stature and age are not as important as they are in most other sports. School- age children start running by participating on their track teams. Older people run because they see running as a way of staying in shape and, in many cases, controlling their weight. 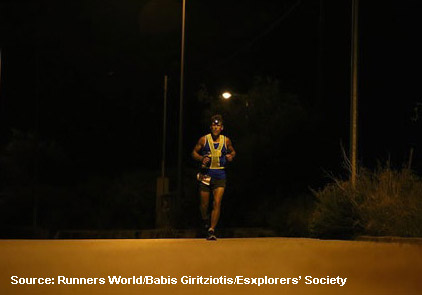 Runners think that running does not require much equipment beyond good running shoes. However, the fact is that these runners, who are running on roadways also being used by motor vehicles, motorcycles and bicycles, need to assume that no one sees them if they running at dusk, night time or early dawn. They need to be seen by motorists, or, alternatively, they need to be running in safe, well-lit areas where motor vehicles are not permitted. Runners, in alarming numbers, are hit by drivers who are intoxicated and/or distracted, and also, runners are often the victims of  hit-and-run accidents.

Driving courses need to add content about how to watch out for runners, according to the American Automobile Association Safety Foundation. Running clubs and physical education courses in schools need to provide runners with suggestions on how to be visible when running.

Runner's World on November 10, 2014, posted an article, 6 Gear Items to Keep You Safe. The reporter, Dean Karnazes recommends the following for runners:

On Thanksgiving Day 2014 in Tampa two runners, a husband and wife who were visiting from Pittsburgh, were killed by a drunk driver. The Pittsburgh Post-Gazette reported the driver's blood alcohol level was nearly twice the Florida legal limit of 0.08.

In November 2014 the Orlando Sun Sentinel reported that a runner died as the result of being hit by a car in Coral Springs, Florida. In the accident report filed with law enforcement, the driver claimed to be unable to avoid the crash when another vehicle in front of him swerved to avoid hitting the runners. Police investigators who responded to the accident speculate that had the driver of the vehicle which hit the runner, hit the other vehicle instead, the results were likely not to be fatal.

Based on a survey conducted by the Insurance Institute for Highway Safety (IIHS), more than half of the drivers interviewed in Florida were unaware of the rules for runners when running on, or near, roadways. On the popular NBC-2 news feature, "Good Question" anchored by reporter, Chad Oliver, he addresses this question. His answer is that runners and pedestrians should be walking or running on the left side of the road, into traffic, while bicyclists need to be using the bike lanes which go in the same direction as the traffic. The theory behind this is the drivers, runners and pedestrians will have a better chance of seeing one another and can take appropriate evasive action if required. Regrettably, this does not help if the driver of the vehicle is distracted or under the influence of alcohol and/or drugs.

"Runners are among the pedestrians who are injured or killed because of the negligence of drivers. It is the driver's responsibility to not be distracted while driving, to drive with caution and sobriety, and protect runners and pedestrians from injury. Drivers and runners need to be particularly alert when running during Florida's foggy season," said Fort Myers Accident Attorney, Randall Spivey or Spivey Law Firm, Personal Injury Attorneys, P.A.

Fort Myers Vehicle Accident Attorney, Randall L. Spivey is a Board Certified Trial Attorney – the highest recognition for competence bestowed by the Florida Bar and a distinction earned by just one (1%) percent of Florida attorneys.  He has handled over 2,000 personal injury and wrongful death cases throughout Florida.  For a free and confidential consultation to discuss your legal rights, contact the Spivey Law Firm, Personal Injury Attorneys, P.A., in Lee County at 239.337.7483 or toll free at 1.888.477.4839,or by email to Randall@SpiveyLaw.com.  Visit SpiveyLaw.com for more information.  You can contact Spivey Law Firm, Personal Injury Attorneys, P.A.in Charlotte County at 941.764.7748 and in Collier County 239.793.7748.