Kathleen Miskell died in 2012 when her parasail harness broke, and she fell 200 feet into the Atlantic. In 2007, Amber White and her sister lost their lives when their parasail rope broke.  Both of these accidents led to the White-Miskell Act which was passed by the Florida Legislature and went into effect on October 1, 2014.

There are estimated to be 100 commercial parasailing operators in Florida which offer the opportunity to soar above the coastline while being suspended under parachutes. 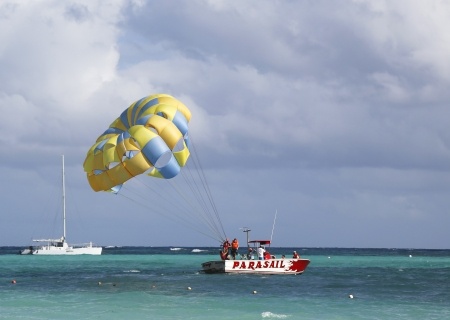 Now these operators/owners are required to have up to $2 million in liability coverage.  This liability policy must have at least $1 million per occurrence for an annual aggregate amount of $2 million. In addition, they are required to have proof of insurance from a state-licensed insurer or eligible surplus lines carrier available at all times. They must be able to provide customers with the insurer's name, address and insurance policy number when asked. Owners/operators must also maintain a valid license issued by the U.S. Coast Guard which would authorize them to transport paying customers. The White-Miskell Act requires the parasailing firms to monitor weather conditions and stop operations in certain situations.  To do this, parasailing vessels must be equipped with a VHF marine transceiver and a separate electronic device capable of receiving National Weather Service forecasts and current weather conditions.

In Panama City, Florida in July 2013 two Indiana teenagers were in critical condition after their parasail crashed in a parking lot.  The Sheriff's Office reported that the parasail had been attached to a boat and the line broke. The Florida’s Fish and Wildlife Conservation Commission investigated the accident. In their news release, Florida's Fish and Wildlife Conservation Commission said a strong storm initiated problems that led to the crash. “These winds kept the chute aloft and several attempts to winch the riders back onto the vessel failed,” the news release states. “The anchor was set to keep the boat from being pulled onto shore. The towline detached and the riders were helpless to control the chute.”

in high winds. The male passenger landed in the water, but the woman’s inflated canopy dragged her across the beach and she eventually collided with the pole of a volleyball net. The NTSB and the Coast Guard performed strength testing on the towline involved in this accident and also examined the vessel’s winch.

After an engine failure caused the parasailing vessel to lose speed, a 31-year-old male

passenger landed in the water. Despite landing gently and wearing a lifejacket, he had lost consciousness by the time the crew pulled him from the water. An autopsy listed his cause of death as drowning.

flight bar, causing her to plummet some 450 feet into the ocean. Her husband remained attached to the flight bar and was successfully brought back to the flight deck. The NTSB and the Coast Guard examined the harnesses and flight bar involved in this accident, and found that the victim’s harness was worn out and had failed due to overload.

"Parasailing operator/owners often require those wishing to go parasailing to sign personal 'assumption of risk' waivers that would indemnify the operator from liability should there be an accident. Even so, when a parasail operator/owner violates the law which protects the parasailer, they could be found liable," says Southwest Florida Accident Attorney, Randall Spivey of Spivey Law Firm, Personal Injury Attorneys, P.A.

Fort Myers Personal Injury Attorney,  Randall L. Spivey is a Board Certified Trial Attorney – the highest recognition for competence bestowed by the Florida Bar and a distinction earned by just one (1%) percent of Florida attorneys.  He has handled over 2,000 personal injury and wrongful death cases throughout Florida.  For a free and confidential consultation to discuss your legal rights, contact the Spivey Law Firm, Personal Injury Attorneys, P.A., in Lee County at 239.337.7483 or toll free at 1.888.477.4839,or by email to Randall@SpiveyLaw.com.  Visit SpiveyLaw.com for more information.  You can contact Spivey Law Firm, Personal Injury Attorneys, P.A.in Charlotte County at 941.764.7748 and in Collier County 239.793.7748.