Toyota's Camry and  Prius V received  "poor"  scores in the new frontal crash test which was recently instituted by the Insurance Institute for Highway Safety [IIHS].

According to a spokesperson for the United States National Highway Traffic Safety Administration, this IIHS test is the first ever to address the risk of severe frontal offset crashes, about 25% of frontal crashes, where the front corner of a vehicle collides with a pole, tree or another vehicle.  This type of crash is also called a "small overlap frontal crash" and seriously injures or kills those in the front seat because a small portion of the vehicle takes the impact.

Vehicle designers and safety engineers have been working on ways to create what they call "crumble zones" which will allow vehicles to absorb their own energy in frontal crashes to make them more survivable. Of the various types of crashes, side impact, rear, rollover and frontal, frontal crashes are the most challenging.  These safety experts point out that seat belts and airbags are designed to help absorb kinetic energy, the energy created by the vehicle occupants being thrown around. Seat belts help in rollover, rear and side impact but in a frontal crash the vehicle itself needs to withstand the impact without structural portions of the vehicle intruding into the occupant area. In a crash there needs to be a survival space created by structural integrity. Then the seat belts and restraints can do their job.

The president of IIHS, Adrian Lund, said when releasing their frontal crash report 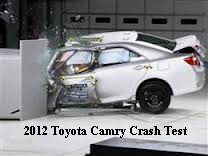 December 20, 2012, that "Toyota engineers have a lot of work to do to match the performance of their competitors.  We see more than 10,000 deaths per year in frontal crashes."

Attorney Ft.Myers  Randall Spivey, Spivey Law Firm, Personal Injury Attorneys, P.A. says,  "Before buying a vehicle, it is important to check its safety rating. A copy of the IIHS report on its new crash test, which simulates severe front-end collisions, will be found here: Status Report - Family Cars  Buyers would not necessarily equate higher priced vehicles with greater safety. The IIHS report shows that the Suzuki Kizashi and Honda Accord did better than most comparable higher priced luxury vehicles in offering crash protection in automobile accidents."

Randall L. Spivey, Fort Myers Personal Injury Lawyer, is a Board Certified Civil Trial Attorney – the highest recognition for competence bestowed by the Florida Bar and a distinction earned by less than 2 percent of Florida attorneys. He has handled over 1,500 personal injury and wrongful death cases throughout Florida. For a free and confidential consultation to discuss your legal rights, contact the Spivey Law Firm, Personal Injury Attorneys, P.A., in Lee County at  239. 337.7483 or toll free at 1.888.477.4839, or by email to Randall@SpiveyLaw.com.  Visit SpiveyLaw.com  for more information. You can contact Spivey Law Firm, Personal Injury Attorneys, P.A. in Charlotte County at 941.764.7748 and in Collier County 239.793.7748.