In a research letter published February 2, 2017 in the medical journal JAMA Ophthalmology, researchers indicate that single-use detergent pods now account for more than a quarter of all child chemical eye burn injuries each year, increasing dramatically from just a few years ago. The letter says that single-load laundry detergent pods are commonly found in households nationwide, including popular brands like Tide Pods, Gain Flings, All Mighty Pacs and other products.

LifeScience.com writer, Sara Miller, says that researchers and physicians at the John Hopkins Bloomberg School of Public Health found that chemical burns to the eye can occur when a child is playing with a laundry pod and the contents squirt into one or both eyes, or if the contents leak onto a child's hand and he or she touches his or her eye. From 2012 to 2015, more than 1,200 preschoolers went to the emergency room for an eye injury that was caused by a laundry pod. 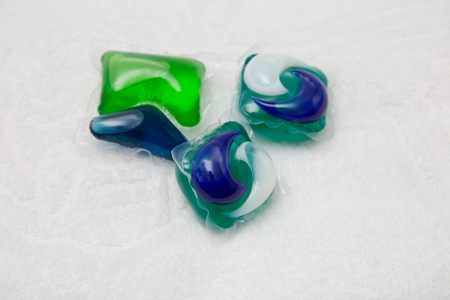 "The role of laundry detergent pods in eye injuries among preschool-aged children is growing," the authors, led by Dr. R. Sterling Haring, a physician and health policy researcher at the Johns Hopkins Bloomberg School of Public Health, wrote in the study.

In addition to eye injuries, laundry pods have been in the news media since a 2014 study found that thousands of kids swallowed the pods each year, doing so causing vomiting, coughing, choking and drowsiness. Even exposure to laundry packet liquids may cause a child to lose consciousness, have difficulty breathing, experience vomiting, severe burning eyes, or temporary loss of vision. In severe cases, these injuries could be life-threatening, but almost all occurrences require immediate medical attention.

How big is the problem?

The American Association of Poison Control Centers (AAPCC) indicates that in 2016 alone there were 11,528 incidents of laundry pod poisoning or exposure involving children age five or younger. In 2015 there were about 12,594 reported incidents.

What is being done to eliminate the problem?

There has been some decline in the number of incidents of children being injured by laundry pods since ASTM International in September 2015 proposed new industry standards for pods.

The American Cleaning Institute, a trade association for cleaning product manufacturers, issued a statement saying, "By the end of 2016, more than 99 percent of the volume of liquid laundry packets being shipped to retailers was in compliance with the ASTM standard. Changes to the packets included strengthening them so they could withstand the squeezing pressure of a child, including a bitter-tasting substance on the outside and making the packaging more difficult for a child to open."

A number of laundry pod exposure lawsuits have been filed against various manufacturers. These lawsuits allege that inadequate steps were taken to ensure the safety of the products. Stronger warnings should have been provided about the importance of keeping the pods out of the reach of children, and individual packaging for the pods should have been used to reduce the risk of injury.

What to do if your child is harmed by a laundry pod?

The PBS News Hour reported on February 2, 2017 that doctors recommend the following in case a child gets soap pod liquid in their eyes. “The first thing you do is drop what you’re doing and run cool water on that child’s eye for 20 minutes before you do anything else,” Dr. Haring said. “Before you go to the ER, before you call 911, run cool water on the eye for 20 minutes straight. That’s exactly what they’re going to do in the ER, and you might as well get started right then.”

In response to the growing problems with laundry detergent packet poisoning, the U.S. CPSC has recommended that parents:

“If your child has been injured as the result of laundry pod ingestion or eye burns, you may be able to file a lawsuit to offset expenses such as medical costs and pain and suffering.  Please contact our experienced team at Spivey Law Firm, Personal Injury Attorneys, P.A. to determine your rights,” said Fort Myers Defective Product Attorney, Randall Spivey.

Fort Myers Defective Product Attorney Randall L. Spivey is a Board Certified Trial Attorney – the highest recognition for competence bestowed by the Florida Bar and a distinction earned by just one (1%) percent of Florida attorneys.  He has handled over 2,000 personal injury and wrongful death cases throughout Florida.  For a free and confidential consultation to discuss your legal rights, contact the Spivey Law Firm, Personal Injury Attorneys, P.A., in Lee County at 239.337.7483 or toll free at 1.888.477.4839, or by email to Randall@SpiveyLaw.com.  Visit SpiveyLaw.com for more information.  You can contact Spivey Law Firm, Personal Injury Attorneys, P.A.in Charlotte County at 941.764.7748 and in Collier County 239.793.7748.