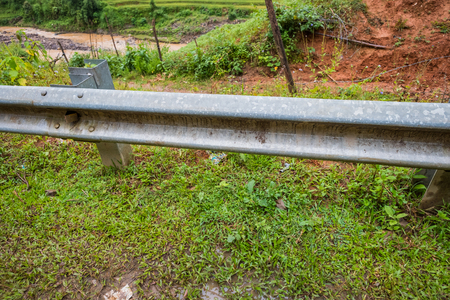 Since June 2016, at least four people have been killed in Tennessee as a result of their vehicles striking an X-LITE end terminal.

On June 29, 2016, an 18-year-old and a 21-year-old were killed after their vehicle moved out of the left lane of Interstate 40 in Cumberland County and was impaled by an X-LITE guardrail. The guardrail entered the vehicle through the passenger compartment and struck the driver and driver’s side rear passenger, according to a crash report from the Tennessee Highway Patrol.

Just six days later, a 69-year-old man was killed when an X-LITE guardrail end pierced the SUV in which he was a passenger, according to Chattanooga police.

Then, on November 1, 2016, a 17-year-old died after her vehicle drifted off the side of Interstate 75 in McMinn County and struck an X-LITE end terminal. The guardrail end pierced the vehicle, killing the teen on impact, according to Knox News.

Most guardrails are constructed of multiple pieces designed to "telescope" or slide into each other when struck, absorbing some of the impact of a crash and preventing the metal end from skewering the vehicle.

Video from Lindsay Transportation Systems, which makes the X-LITE guardrail, shows how the guardrail is supposed to work, telescoping backward to help absorb an impact. As reported by US News, the Tennessee Department of Transportation found in some high-speed crashes that instead of collapsing backward, the first section of rail can separate and splinter, allowing the next metal section to potentially rip through the vehicle.

On September 1, 2016, the Virginia Department of Transportation announced that it had removed X-LITE terminals from its list of approved equipment.

Less than one month later, on October 25, 2016, the Tennessee Department of Transportation (TDOT) removed the X-LITE guardrails from the state’s qualified products list citing concerns about how the terminals held up over time, specifically the parts that are designed to crumple upon impact. The department also cited concerns about the product’s performance at speeds more than 62.2 mph, which is the speed most guardrails are tested.

Later in 2016, TDOT decided to remove the existing terminals from roads with a speed limit of 45 mph or greater, a process that will take approximately six months to complete. The state sent a letter to federal regulators expressing concerns about the device, and is spending millions to remove all 1,800 of them from Tennessee roads.

On March 27, 2017, SB 5423 was introduced before the New York State Senate that proposes a ban on the use of Lindsay Corporation X-LITE guardrails on highways with speed limits of 45 mph or more.

CBS News reports that most installations of X-LITE guardrails are in these seven states: West Virginia, Massachusetts, Tennessee, Maryland, Texas, North Carolina and Virginia. Florida does have on its approved product listing X-LITE Flared and X-LITE Parallel products.

Lindsay Transportation Solutions, which manufactures the X-LITE guardrail, released a statement to CBS News saying the claims are "without merit" and that "X-LITE has successfully passed crash and safety tests in accordance with federal standards."

What legal action can be taken?

As with any defective product, the manufacturer and/or seller can be held liable for damages and injuries caused by negligence including:

“If you or a loved one has been injured in an accident involving a defective guardrail, contact the experienced personal injury attorneys at Spivey Law Firm, Personal Injury Attorneys, P.A. There are no costs or attorney fees unless we make a monetary recovery for you,” said Attorney Randall Spivey.

Fort Myers Wrongful Death Attorney, Randall L. Spivey is a Board Certified Civil Trial Attorney – the highest recognition for competence bestowed by the Florida Bar and a distinction earned by just 1 percent of Florida attorneys. He has handled over 2,000 personal injury and wrongful death cases throughout Florida. For a free and confidential consultation to discuss your legal rights, contact the Spivey Law Firm, Personal Injury Attorneys, P.A., in Lee County at  239. 337.7483 or toll free at 1.888.477.4839, or by email to Randall@SpiveyLaw.com.  Visit SpiveyLaw.com  for more information. You can contact Spivey Law Firm, Personal Injury Attorneys, P.A. in Charlotte County at 941.764.7748 and in Collier County 239.793.7748.