The scientific talents of high school students are evidenced each year at local science fairs. This year a couple of students from Central High School in St. Joseph, Missouri created a device that goes outside a football helmet called the “shock absorber.” This could be a game changer as prior to now efforts have centered around the improvement of the padding inside the helmet. Basically, the shock absorber is a neck roll on the outside of the helmet which keeps the head from snapping back and forth when a player is hit.

NBC-2 reported on April 29, 2016 that left guard Harrison Coulter had seen fellow football teammates go down with concussions, and he said, “I’ve been on the ground dizzy, and that’s scary to me.” Harrison offered to test the prototype of the safety device which was designed by two classmates, Zach Fannon and Cole Baines. At the science fair the young inventors got rave reviews with crowds of 30 gathered around all the time. 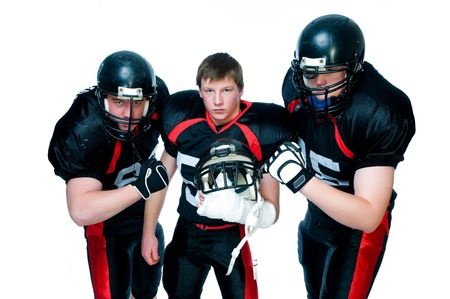 The American Academy of Neurology on April 27, 2014 presented the organization’s 2013 study results at its annual meeting. These results showed that the football helmets which are currently available and being used when playing provide linear impact protection from bruising and skull fracture. The study reported that they do little to protect against hits to the side of the head, or rotational force. These side hits are often a dangerous source of brain injury including concussion and encephalopathy (Encephalopathy is a term that means brain disease, damage or malfunction presenting itself with a very broad spectrum of symptoms ranging from mild, such as some memory loss or subtle personality changes, to severe, such as dementia, seizures, coma or death. Source: medicinenet)

An estimated 8.9 percent of all high school athletic injuries, according to the American Academy of Pediatrics (AAP), result in concussions. In the first seven weeks of the 2015 football season there were seven deaths nationwide due to blunt-force injuries to the head, according to CNN. Five high school football players in 2014 died from head and spine injuries as reported in a survey by the National Center for Catastrophic Sports Injury Research (NCCSIR) at the University of North Carolina.

The Huffington Post reported in March 2016 that for the first time an official of the NFL acknowledged a link between football-related head trauma and degenerative brain diseases, like chronic traumatic encephalopathy.

NFL players have been taking the problem seriously. Most recently the safety for the Kansas City Chiefs, Husain Abdullah, said he was leaving after seven seasons because of concussions. A one-year veteran with the San Francisco 49ers, Chris Borland, announced his retirement citing concerns about head injuries.

Work is being done from a design standpoint to make football helmets safer. In the last couple of weeks, a Seattle-based helmet company, VICIS, released its brand-new football helmet which they believe could be the safest in the world. It is a four-layer helmet with a semi-soft shell, an impact absorbing layer, an inner shell to prevent skull fractures, and a layer that helps improve the fit of the helmet. The VICIS helmet still needs to pass a final safety test before being available for use.

If the new “shock absorber” helmet invented by the high school science fair students gets approved, high school football may become a safer game to play for many young athletes.

“New, safer helmets for football players are important for the welfare of all those playing the game. However, the responsibility of the adults involved in the game to recognize and manage the situation after football hits is even more important. If your young person has suffered a head injury while playing football or any game, be sure they first receive medical attention, then contact the brain injury lawyers at Spivey Law Firm, Personal Injury Attorneys, P.A.,” said Attorney Randall Spivey.

Naples Brain Injury Attorney,  Randall L. Spivey is a Board Certified Trial Attorney – the highest recognition for competence bestowed by the Florida Bar and a distinction earned by just one (1%) percent of Florida attorneys.  He has handled over 2,000 personal injury and wrongful death cases throughout Florida.  For a free and confidential consultation to discuss your legal rights, contact the Spivey Law Firm, Personal Injury Attorneys, P.A., in Lee County at 239.337.7483 or toll free at 1.888.477.4839,or by email to Randall@SpiveyLaw.com.  Visit SpiveyLaw.com for more information.  You can contact Spivey Law Firm, Personal Injury Attorneys, P.A.in Charlotte County at 941.764.7748 and in Collier County 239.793.7748.